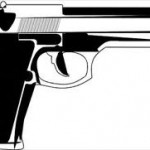 Seven basic police academy recruits seemed to be potential danger during the summer after a series of gunshots rang out near the Cuyahoga Commmunity College Metro campus PE track, situated south of the gymnasium.

According to the incident report, the cadets and three instructors were using the track for an evening training session on June 21, 2012, around 9:15 p.m. On their first turn of the track, the stillness of the night was shattered by four shots. As the recruits were ordered off the track and ran to seek shelter next to the brick wall ramp on the south side of the gym. Another volley of shots was heard.

Tri-C police officer Reginald Eakins was position near the track on E. 33rd Street near the Advanced Technologies Center work entrance, with a view of the track. Eakins heard the three-time volley of shots. He reported not seeing muzzle flashes, which should have been visible given the time of day was after dusk.

“There was an officer who happened to be stationed in that area that evening, and he heard the report of the rounds fired,” said Lt. Ronald Wynne. “There was no indication that it came in our direction, or the direction of the recruits.”

In a recent incident Sept. 17, guns shots were reported at the Cedar Hills Apartment complex, located across Community College Avenue. A victim ran onto the campus where police called Cleveland Police and an ambulance.

“These shootings have no connection whatsoever to Tri-C,” Wynne said. “We take a lot of pride that we don’t have serious incidents down here at the campus. We have a good working relationship with local law enforcement, including CMHA police.”