Student Attended Classes While Robbing Banks for Nearly a Month

While attending classes, and being a proficient and engaged business student, Kevin Walcott was robbing banks and causing alarm among bank employees around the Greater Cleveland area between his studies, according to police and FBI reports.

The FBI named six banks Walcott is suspected of robbing, not including the bank in Shaker Heights where he was apprehended.

The robberies all took place beginning Oct. 26, with some robberies taking place just one or two days apart from each other.

Just before Thanksgiving Day on Nov. 21 at around 10:40 a.m., Walcott entered the PNC Bank at 20711 Chagrin Blvd. demanding money, according to an FBI press release. A bank employee pressed the “panic button” alerting authorities that a situation was in progress. A Shaker Heights police officer on routine patrol nearby, responded to the call, and apprehended Walcott just after the robbery.

The news came as a shock to students in Walcott’s Tuesday and Thursday afternoon Small Business Management class. Walcott was a key member of a group of students preparing for an end-of-term presentation about starting up a business called Crystal Clear Detail, a business concept that detailed automobiles.

“He was a really cool guy. I would never thought that he would be the type of person that he turned out to be, but some people just make bad decisions,” said Diane Taylor-Gates, who was in Walcott’s group project. “He did the research on how much everything would cost. He had everything accounted for down to the rags; how much it will cost per rag, and how many rags we would need. He did a lot for this project.”

On Dec. 4, when the group presented the project to the class, they planned to dedicate the project to Walcott, who is currently in the custody of the U.S. Marshals Service.

Business Professor Andrew Bajda said Walcott was engaged and was very involved in his small business management class, and didn’t know what to think when he stopped showing up for class.

“I didn’t see any signs of him doing anything bad, and I thought he was a cool person,” said James Wakefield, also in the group project. “Only thing I can think of that he was needing money, or something, was for his business ideas or whatever, and that’s the only way I can think of him doing something like that.”

The Voice News was the first to uncover U.S. Court documents showing Walcott had robbed two other banks in 1998 and upon almost right after his release in 2002.

“You never know what people are going through and what they are thinking about,” Taylor-Gates said. 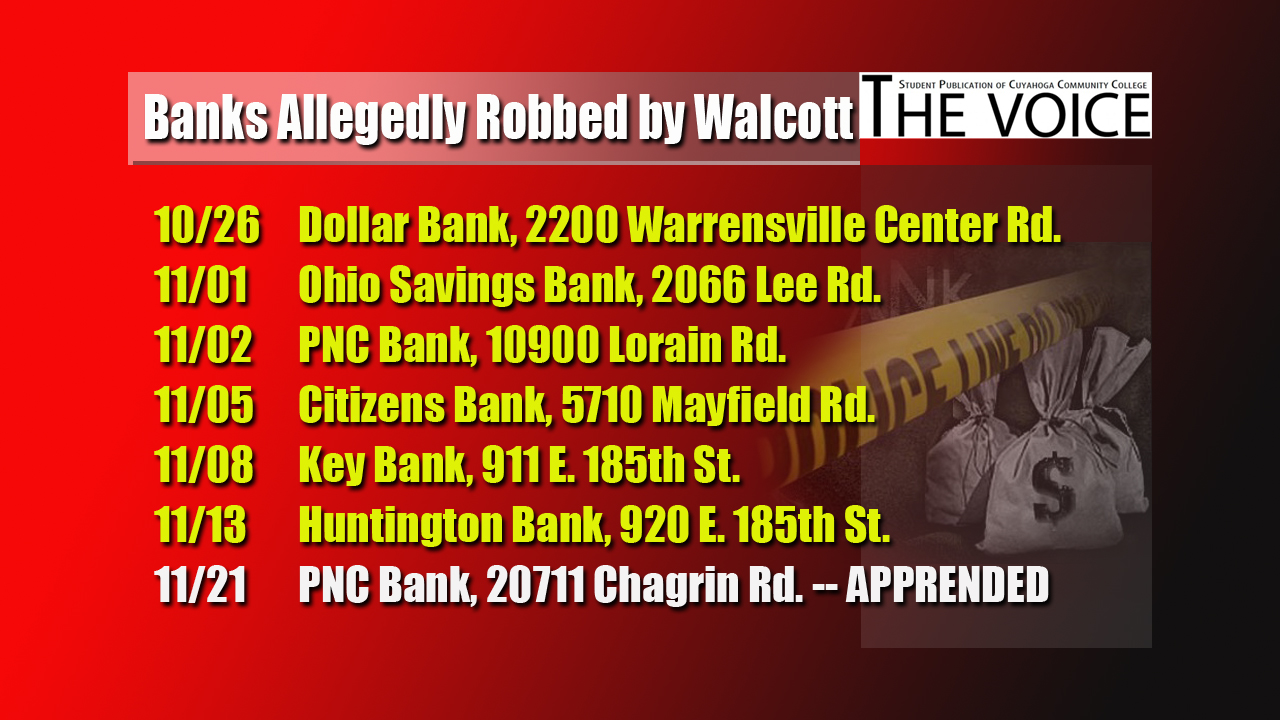