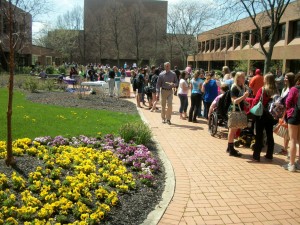 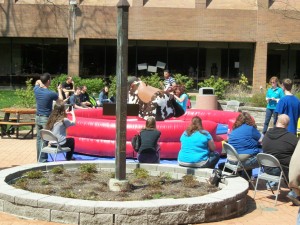 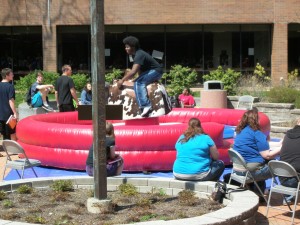 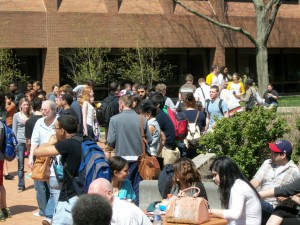 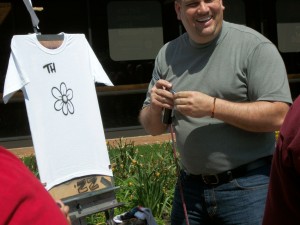 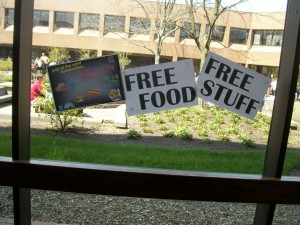 Student Life put on a picnic today, to celebrate the end of the school year and the beginning of warmer weather. To celebrate, there was food, music, activities, and sunlight. Lines had backed up on the amphitheater courtyard, causing some confusion at first until some helpful student would tell the newest participant which line to get into. Food was available for the asking, including veggie burgers, chips, burgers, water, hot dogs, and cold cans. A pair of airbrush artists made custom shirts for anybody who was willing to wait in line. You could custom design your own painted glasses. Campus Life had a crafting area that had so many people around I couldn’t see what they were making, but I could clearly see the fun they were having. And the star attraction was probably the mechanical bull.

One student summed it up best. T.O. stated that the bull was “a beast. You get on, [and] if you haven’t done it before, you want to go again.” True to his word, I watched T.O. get in line a couple times, tackling the mechanical monster, determined to tame it. Several others waited in line with him, and every person walked out of the padded ring with a smile on their face.

I even spotted Student Government putting actions to words today as they passed out the food. So I’d have to say that it was a good time, and a fun event. Several students were overheard commenting on how much fun they were having, and practically everybody was laughing and smiling. A big thank you goes out to Student Life for putting on this great event, asking nothing more from students than braving the warm sunlight in the middle of the day.

A Community Celebrates Women Rescued After Missing for a Decade

From Critic to Filmmaker