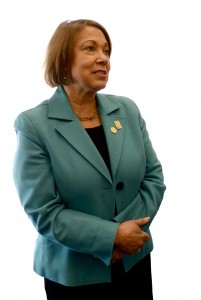 It’s been 21 years since President Jerry Sue Thornton first started working as the leader of Cuyahoga Community College, and since then enrollment has increased dramatically, several buildings have been added, and now Thornton believes it was time to open a new chapter in her life.

On June 30, Thornton will hang up the reins as president of the college.

“I just felt like 21 years was a good tenure, and to give someone else an opportunity to enjoy the leadership position that I’ve had with this institution,” Thornton said.

Describing her tenure here as a “24/7 job,” Thornton also said it was her “dream job.” One of the major milestones she believed she helped changed as president was the perception of Tri-C being an extension of high school, and not that of the setting of higher education. She said the “Tri-High perception” the school garnered was unfair, and that the Bush and Obama administrations’ spotlight on the nation’s community college has opened a pathway for Tri-C, and other community colleges.

“We see it become more prominent of a pathway to futures for individuals locally in our community,” she said. “The acceptance of what we do is greater.”

Now, the college offers courses to students who may still be working at a high school level, college-level courses, and honors programs as well.

Thornton received two very public votes of “no confidence” by the faculty of the college. The first in 1997, after taking the advice of consultants on how Tri-C would operate its school year in quarters or semesters, Thornton went with the recommendation to switch the school year into three semesters. Faculty members voted on a resolution of “no confidence” citing her administration often ignored its recommendations, according to local reports.

“I think there was a real dilemma and misunderstanding from some of the faculty who wanted to stay with quarters,” Thornton said. “We had to prevail with making the recommendations to go with semesters which was the consultant’s report, as well as with what was happening with universities around us.”

The second vote happened in 2010 and had to do with the faculty’s union negotiations.

“It came down to an understanding that we didn’t have the dollars to meet some of the expectations,” she said.

Just after Thornton announced her retirement date in January, the union and Tri-C administration have agreed on a suitable union contract for the next three years, an event Thornton said she wanted to iron out before the next president starts.

Students in financial need with aspirations of completing a program at Tri-C have likely received help from the Tri-C Foundation in the form of scholarships. One of Thornton’s lasting legacies is the Presidential Scholarship Luncheon which happens each year in the fall. The foundation is famous for attracting notable keynote speakers such as Oprah Winfrey, Tom Brokaw, Condoleezza Rice and Tim Russert, amongst the 21 speakers since Thornton’s inauguration. Recently, former U.S. Sec. of State Madeleine Albright and former U.K. Prime Minister Tony Blair spoke at the luncheon. Thornton said while she can’t really pick a favorite speaker since 1992, she felt NBC News Washington Bureau Chief Tim Russert was her top pick.

“There was something about Tim Russert that was very touching to me,” she said. “I don’t know if it was the fact that he went to school here locally, it felt more like someone you knew and he was a neighbor.”

Russert, an alum of John Carroll University and Cleveland-Marshall College of Law, was the 2005 luncheon speaker. Less than three years later, Russert died from a heart attack at the age of 58.

With the horizon of retirement quickly approaching, Thornton said she looks forward to relaxation and spending more time with her husband, two daughters and four grandchildren. Among her leisure activities are movies, plays and rounds of golf.

“This jobs really is 24/7, it leaves very little family time and so it’s time for us to capture some of that family time and do some of the things we like to do,” she said. “We like to play golf, and that takes time, so we’ll have a little more time on the golf course.”

Thornton plans to remain in the Cleveland area and will have a seat on the Tri-C Foundation board, and plans to help her successor transition into next president of Tri-C.

The broad shoulders of the new Western campus president