A Bird of a Different Feather

The most common reaction to seeing the strange bird roaming Tri-C’s Metro Campus is often curiosity and amusement. Many students may already have seen it wandering the visitor parking lot, which leaves them asking the questions: What is it? Where did it come from? Is it safe here? In search of these answers, students on the Metro campus were asked about their feathered friend.

“It’s a guinea fowl,” Kara Gonzalez said. “I’ve been watching it for a while.” She adds that she can’t help but wonder where it came from, thinking it must be someone’s pet. Gonzalez seems interested in learning more about the bird, too. It is, in fact, a guinea fowl. They are similar to chickens in that they’re kept by farmers, usually as pest control.

When asked about sightings around campus, students Jamel R. and Carl C. confirm that they, too, have wondered about the guinea fowl they frequently see. Jamel pulls up a picture he took on his phone of the bird pecking at his feet, saying that it seems to have no fear of people, coming right up to them.

Carl points towards the Business and Administration building. “It wanders around out there,” he explained, saying that he has seen it on the picnic table under the trees in that area.

Another student said that while at the RTA bus stop directly in front of the visitor parking area, the bird will even hop up on the bench “like it’s waiting on the #11 bus” with them. According to another observer, the guinea fowl even crosses the street at the crosswalk, making sure to wait until the traffic is clear.

A group of students recall the bird being there when one of them started at Metro Campus two years ago, suggesting that it has probably been living here since 2010. That is quite a long time for a large, mysterious, animal to be on campus. A box was even built for the guinea fowl, so obviously people care for the pleasant bird. Students also say it is fed by passersby and seems to have adapted to living here well.

This begs the question of where it came from. Guinea fowls, in general, are native to African plains, common in countries such as Kenya. The one here in Cleveland is of the species N. meleagris commonly known as the helmeted guinea fowl. Domestication of the bird is popular among farmers looking to protect their land from insects and larger animals that the guineas alert them to. However, a possible home has yet to be determined since the closest breeder found is all the way in Geneva, Lake County. The bird seems to be content to stay on campus entertaining students, staff and pedestrians who happen to cross its path. 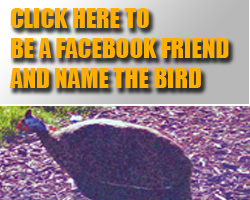 Have you seen the guinea fowl? We want to know. If you spot the pleasant pheasant wandering the school grounds, snap a picture and upload it to the official Facebook page at http://www.facebook.com/mysteryguinea. Just post your picture on the wall and let us know where you took it.

The naming of the guinea fowl is the next order of business, and we want you to be a part of it. Visit http://www.cccvoice.com, or post your creative or interesting responses on the Facebook page and your suggestion might just be on the ballot this November to name the guinea. We think our bird is a female due to the size and coloring, but the two genders look similar in this species. Unisex names are probably best, so get thinking and keep an eye out and a camera ready… because there will be prizes for the best photographs.

Please be respectful of the animal. Do not attempt to capture, chase, or touch the bird. This is still a wild bird and not an ordinary house pet, and guineas may carry diseases or infections that may be harmful to people so keep this in mind when interacting with the bird.

If you have any questions regarding guinea fowls, there are many resources on the web.
Links to reliable information are listed below.

Campus Activities Board presents a Greek event October 17 at West