[su_row][su_column size=”1/3″]MTV has had its reign over television from 1981 to today. Stephen Friedman, President of MTV, has announced that starting August 2016 MTV will no longer  be on television or any type of media.

“We had a good run,” Freidman said; “But I can no longer see ourselves being called MTV when the ‘m’ no longer stands for music.” Freidman also says you can expect a small shift in the next two years while MTV is still up.

“You can expect to see more and more reality shows until MTV is no longer existent.” Freidman also explained that MTV would be getting a new name called FRTV.[/su_column] [su_column size=”1/3″]”This stands for Fabricated-“Reality”-Television-V.” “We really aren’t sure what the ‘V’ stands for yet, but we’ll think of it.”

Over the years MTV has been playing music only in the morning and during its scripted “reality” shows. We asked Michael Miguel, about how he feels regarding this change in MTV.

“I really don’t watch MTV, so I don’t care. I figured if I was going to kill brain cells, I might as well have some fun and get a lobotomy; Excuse me, I’m late for an appointment,” said Miguel.[/su_column] [su_column size=”1/3″]FRTV will continue on after MTV’S demise. FRTV will be adding some new shows, such as the Italiano’s; which is a crossover between Jersey Shore and Soprano’s; the controversial show, 32 and Grandparents, which takes place sixteen years after 16 & Pregnant-with the original parents now grandparents and living with the irony of their teenagers getting pregnant. [/su_column][/su_row]

(You got an idea or reaction to?  I want to hear it! Email me at fabricated.fact@gmail.com)

[su_row][su_column size=”1/3″]     In 1980, Tabanji fled war-torn Lebanon with her family and took refuge in Jordan; there she became a French teacher as a young eighteen year old, who hadn’t graduated high school.

Once her family moved to the United States in 1985; Tabanji’s doors of the American Dream were falling into place. The doors of opportunity with language, education and prosperity became readily available to her as a teenager. Once Tabanji graduated from high school, she dreamed of furthering her education. It wasn’t until later in life, after marriage, the birth of her two sons and opening a business, she attempted to take a few courses. Now 30 years later after fleeing Lebanon, Tabanji decided to take a new journey once more. The return to her passion of education. [/su_column] [su_column size=”1/3″]

In 2010-2011, Tabanji made the decision to return to college, choosing Tri-C as her vantage point. 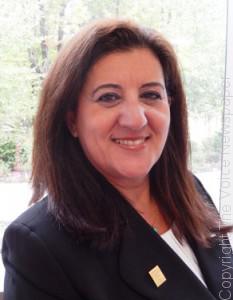 Since enrollment she has been involved with a host of student leader organizations: Student Government (Vice-President / Secretary); Student Ambassador Program; Westshore International Club and President to Joint Student Council; (The governing Student Government Leaders which consist of: President’s and Vice Presidents of all four campuses.[/su_column] [su_column size=”1/3″]

Tabanji says, “she loves to be involved, learning more, working hard but most of serving others. In April of 2014 the Joint Student Council elected Mireille Tabanji to serve as the new Board Student Scholar 2014/2015, to represent all student’s college-wide; and to serve as a liaison for the students to the College’s Board of Trustees as a non-voting member. While in attendance at the Board Meetings and Committee Meetings, Tabanji is able to voice the heartbeat of the students and provide ways in which the student government officers were able to assist. Tabanji states. “I have big dreams to accomplish and it is never too late to try and reach them.”[/su_column][/su_row]

[su_row][su_column size=”1/2″]        When incoming students go to college, there’s always something new and exciting to look forward to. Whether it would be joining a club or an organization, there is always something new to discover. One of these new exciting experiments to try is the new restaurant Café 4250.

Café 4250 is located on the Eastern Campus in EEC 180. It is a student-operated restaurant whose purpose is to serve people with divine and delicious food. Café 4250 is also run by the Hospitality Management Program, which also helps students in the major of culinary arts benefit from the program.

The Aramark Endowed Scholarship was established by Aramark’s partnership with Tri-C; to support students in the Hospitality Management and Dietary Technology Programs.[/su_column] [su_column size=”1/2″]Aramark is the leader in professional services, providing award-winning food services at universities, school districts, stadiums and arenas.

One of the students involved in the program, Les Hicks II, was employed by his uncle when he was fifteen years old and became inspired by him to enter his major of culinary arts. “Most students don’t even know about the program,” Hicks said. “I learned more here than I did anywhere else.” Hicks also said that working for the café gave him an idea of how working in that kind of business works.

It was also great to see Dr. J. Michael Thomson, the Eastern Campus President, supporting Café 4250; the students and their efforts. Café 4250 is highly recommended for all students to patronage; they might come in hungry but they will leave with a smile on their face.[/su_column] [/su_row]

[su_row][su_column size=”1/2″]Do you hate subjects such as Geometry, Calculus or Algebra? If so, you’re not alone. Each semester, students face their biggest academic fear… Mathematics. Flash cards, Study groups and tutors have assisted students academically for years. However, Eastern Campus Assistant Professor of Mathematics, Aaron Altose has found a way to reach as well as teach students the fundamentals of Math…YouTube. 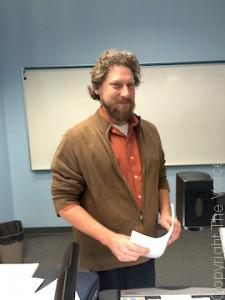 With over a million views, Professor Altose’s channel, MathWithMisterA provides students with 222 videos on how to factor polynomials. In 2009, Altose decided to create the channel to visually assist students that longed for more detailed examples that they’d have access to from home. “I was meeting with students a lot outside of class, and I found myself doing a lot of the same problems over and over,” Altose explained. “I thought that it might be helpful for students to have videos to watch on their own time and at their own pace, so that when we are together we can go into more detailed questions, instead of just doing the same kinds of examples over and over.”[/su_column] [su_column size=”1/2″]It’s not surprising that Math has always been Altose’s favorite subject growing up. With a Master’s degree in Mathematics from Cleveland State University, Altose didn’t realize that he wanted to teach until grad school. In 2006, the Cleveland native found himself in need of a job. His plans, initially were to find something that would “pay the bills”. However, Altose received more than he bargained for. “I first came to Tri-C to teach because I was hungry and I needed work,” explained Altose. “But, in my first semester teaching at Tri-C, I basically liked every single thing about the job, so, I didn’t think about trying to do anything else after that.”

If you look up the word ‘interactive’ in the dictionary, you might stumble across the name Aaron Altose. Nearly every student that describes Altose’s teaching style, can’t help but to mention how hands-on and personable he is. Chanel Seawright, a student in Altose’s Math 0990 class describes her experience. “His teaching style is very interactive,” Seawright explains. “He doesn’t just lecture, he walks you through things and he’s very personable.” Ironically, Altose credits an extremely impatient high school Math teacher for his nurturing style in the classroom.

“To be honest with you, I had a math teacher in high school that I did not care for at all, and so I basically try to do the opposite of what my high school teacher did for me, “said Altose. Aaron Altose turned a couple views into a million, a negative past experience into a positive, and many confused students into confident mathematicians. Currently, His goal is to reach two million viewers on YouTube. Will he reach it? You do the Math… [/su_column] [/su_row] 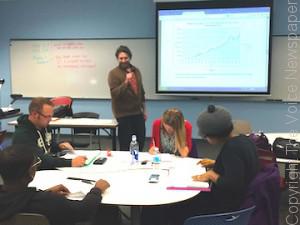 Why you should become a Mandel Scholar

LIFE AS A GRAPHIC DESIGN STUDENT AT TRI-C