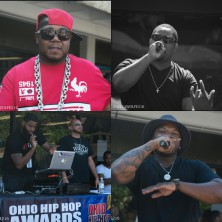 Talk of Tri-C’s second annual Hip Hop Homecoming had been filling the air since the beginning of the school year.
On Sept. 17th anticipating students swarmed the Metro campus courtyard as the Homecoming concert got started. With Tri-C teaming up with the affiliates of the Ohio Hip Hop Awards, this year’s homecoming had great things in store for students.
To kick off the day concert, an open mic was held for the students to showcase their talents. This gave an opportunity for any local artists to perform in front of a nice sized crowd full of other local artists, producers, and students of similar interest. Of course, students were told to keep their music as clean as possible to assure that the concert was a safe, respectable and fun experience.
After the open mic, there were performances by more popular, local, Cleveland artists, some who were also nominees for this year’s Hip Hop awards. Line dance king Big Mucci and Rappers Ray Jr., Preme Dibiasi and DJ Ryan Wolf turned the crowd up with songs that everyone loves. Still the concert wasn’t over; the main headliner had yet to perform.
Last year, Tri-C’s first Hip Hop Homecoming got most of its buzz by showcasing Biz Markie and DJ Swamp as special guests. Students were excited that artists of such respected caliber would come to Cleveland for a good time with them. So when they found out that this year’s concert would feature rapper Twista, there was no denying a bigger turn out.
Students were hyped for Twista’s tongue-twisting performance. He performed classics like “Overnight Celebrity” and “Slow Jams” that most people could sing along to. He even rapped a new song to close out and let us know that he’s still got that quick flow.
The concert wasn’t the only one of the benefits this weekend. VIP tickets for the Ohio Hip Hop Awards were given away and other events were made free to registered Tri-C students. A lot of OHHA weekend passes were also given away to attend the remaining events for free.
Clearly, Tri-C’s second Hip Hop Homecoming was a success. There was no violence, everyone had a good time, and students even got the chance to network with one another. With all considered, it’s safe to say that this year was an inspiration for greater things to come.

Tri-C to Sex Offenders: You Must Report