Evolution of a Black Girl: From the Slave House to the White House One Woman, 12 Characters 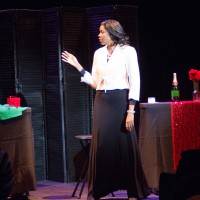 BY: NAIZHJAY MCDANIEL
Metro Staff Writer
As Black History Month came to an end Feb. 29, a lot of people received one more reminder of where they came from.“Evolution of a Black Girl: From the Slave House to the White House” was performed at Metro campus in the Black Box Theater. Though hard to find, it didn’t stop the audience from being pleased by the show.This one-woman show, performed by Morgan Avery McCoy, took the audience on an emotional journey from 1400’s in Africa to present day in America, while portraying 12 historical African American women.
Ms. McCoy’s acting was very well executed as she transformed into these characters.
She was not only inspirational to some, but left others in confliction on how to feel.“I didn’t know whether I wanted to laugh or cry,”stated show attendee, Lisa Garrett. Ms. McCoy’s underlying attire stayed consistent—black leotard, ankle length skirt and
stockings. Even her red painted lips seemed to be the consistent makeup choice for each of the
twelve characters. However, she changed layers of clothing, wigs and her accent to diversify each woman.
The stage design was simple, yet powerful. It contained items portraying what each
woman contributed to history and a dressing screen for her to change looks. The music choice
was very fitting and well thought out. It too, took the audience on
a journey as the genres transcended from the 1400’s to present day.
Though the show was open to all, Ms. McCoy performed to an African American
audience. Some members left feeling empowered, while others were
left in shock.“That show was so empowering. It really showed me how I take life for
granted sometimes and my education,”said Tamara Hasiley, an audience member.
Overall, the show was cohesive and very well executed. Ms. McCoy performed this show at Tri-C last year and for the second time around it was a success.
Previous Article

Student Spotlight: Isa Moore “Just Like That,” My Personal Story