Photo provided by The Technicolors

Arizona alternative rock band, The Technicolors have spent years crafting their music style which has evolved over time. From a rock and roll portrayal to an electronic sound, they now base themselves on a platform that carries a modern alternative rock sound. The band seems to have strong confidence in their content. 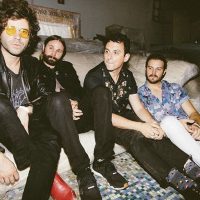 o’ Nicolette and drummer, Austin Scates have recently concluded their first headlining tour this summer, Turn Into Blue, performing for 29 cities across the United States. During the month of October, the band had the opportunity to play support for performer, Matt Maeson on The Day You Departed Tour, ending their part at The Grog Shop in Cleveland on Sunday, Oct. 27.

“It felt unbelievable, we’ve defiantly aligned with people who are coming to the shows.” frontman, Brennan Smiley explained about his band’s overall experience on this tour. “A lot of these shows have been sold out…and we’ve been playing mostly in front of people who don’t really know who we are. There’s defiantly been good energy around trying to win people over, and people have been responding really well.”
Through struggles of a sense of feeling out of place during their early touring days, the band decided to take a year break from the visibility of the music scene and touring life, to take time to reflect on themselves and find a true balance through the creation of their music.

“We were just burnt out…we were kind of just doing a lot of tours that didn’t make sense and we thought we had to do them to stay relevant and that’s what we were being told by everyone to keep going,” Smiley explained. “We never actually never challenged that idea that you have to always stay relevant and always stay in everybody’s face. We’ve just been told that, to stay visible. Maybe that wasn’t right for us, and we kind of took a break for a year…but we were still recording a lot of music.”

Through the base of their career thus far, they have put out a collection of extensive singles and albums. Each one holding its own vibrant sound that displays an aspect of unique lyrics and musical attributes. Their latest album that was released in the summer of 2017, Metaphysical, portrays itself of true emotion that carries the listener to dig deep into their imagination.

“You are trying to chase that wave of emotion or spark or the urgency to do something. That’s kind of what we think is digging into those kinds of magical qualities of music, its channeling that.” Smiley said, describing the album’s sound. “I think one of the reassuring things that we’ve heard from people, especially people who have maybe never heard us for the first time has been that our songs feel like journey’s and that’s been an interesting thing.”

The Technicolors haven’t set plans for their next tour, but they are in the works of recording new content.

Is It Too Early for Browns Fans to Hit “Panic Button?” Tri-C Students Weigh In