On February 25 through the 29th, TRI-C Western Campus presents 2 in 1 act “Baby Food” and “Dentity Crisis” directed by Madison Ellis and stage-managed by Kristen Boehnlein. “Baby food” is a modern comedy about a desperate couple, played by Anna Marsick and Jarred Laska, who ask lifelong friends, played by Kyle Sense and Madison Pauley, to be the god 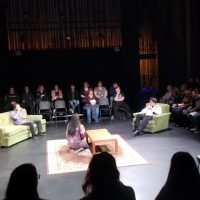 parents of their newborn child. Little do the parents know their friends are not so daring diners and are on the edge of a divorce.
“Dentity Crisis” is about a young girl named Jane, played by Emily Taylor, who is cared for by her annoying, cheery, brandished, mother, played by Patience Zelenok, after Jane has a mental breakdown. Throughout the play, Jane is confused by her disorderly brother, played by Bradon Alexander-Smith, who changes into her father, grandfather, and her mother’s French lover. To top it all off Jane’s psychologist Mr. Summers, played by John Mockler, and his wife played by Adam Howard, go through a sex change to save their marriage. This comes to question is Jane losing her sanity or are the people around her?
On Friday, February 28th, I sat down with the cast and crew to interview them on the plays. The performance was a boxing show — where the audience is seated on stage with the Actors — and it ran for 45 minutes. Actors Madson Pauley and Emily Taylor both agreed that they like boxed shows. They respond by saying “The energy is so tangible, so right there, it is a better way to get through to the audience. It creates more intimacy.” Not only was the seating of the play unique but the storyline itself was. Director Madison Ellis responds, “I would consider both BF&DC as scripts that fall under the absurdist genre. This is unique to the stage because absurdism explores the intricacies of normalcy and chaos beyond our social scope. Acting choices and characters are given a wider range of possibilities because nothing can be ‘wrong.’” When I asked the cast and crew why someone would want to see this play, they answered, “Because it doesn’t make sense, it’s weird, and the show keeps you wondering what is happening. “Baby Food” makes you question kindly jesters and “Dentity Crisis” makes you ponder, is the main character crazy or is everyone one else around her.”
As much as the actors and crew enjoyed being part of the show, there were some challenges leading up to the performances. The cast didn’t have long to learn their lines until they had to take it the stage. “We only had 4 weeks to learn our lines, and some of us had more lines than others,” says John Mockler and Jarred Laska. Other difficulties for some included taking the stage for the first time, much like actor, Kyle Sense. “In school, I would be afraid to give speeches in class, and now I’m a character opposite of me performing in front of an audience.” Another actor Bradon Alexander-Smith share some of his challenges, “The hardest part for me was play four different characters, but I learned to just to be four different people instead of one person with four different personalities,”
I asked stage manager Kristen Boehnlein on her take of how the cast and crew preformed, Kristen replied, “for the amount of time the cast had, they did a fantastic job. For everyone that was part of the cast, this may be the only time they get really good parts like these on this stage, and they pulled it off well, and our director, Madison, did an awesome job since this was her first college directed play.” If the cast could back to when they first audition, Anna Marsick, Adam Howard, and Patience Zelenok commented, “ We wished we would have told ourselves before then that you have to have confidence, task risk, and not care what others think.” The cast and crew did a marvelous job with their productions. In the month that the cast and crew had, the performances were so comical and captivating, that you could attend more than once and never be uninterested. Overall, the production was very well directed and ran wonderfully.
If you would like to see more with the theater arts or would like to see the next shows go to https://www.tri-c.edu/arts-and-entertainment/tri-c-presents/tri-c-theatre.html. Come enjoy the next upcoming plays, “She Kills Monsters,” at TRI-C Western Campus and “Gem of the Ocean,” at TRI-C Eastern Campus