OPINION: The Death Penalty with Views and Beliefs from Tri-C Professors 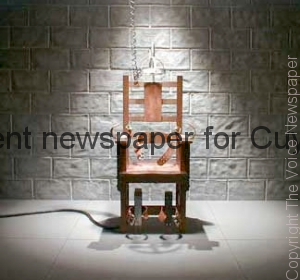 The Death Penalty. It is a topic that brings to mind those certain dark objects such as needles, the chair and the noose. Many argue that it is a means for justice, while others stand in strong opposition, proclaiming that it serves no benefit to society. From recent news, many in the United States were saddened at the unnecessary execution of
Georgia resident Troy Davis, despite numerous evidence of lacking any involvement in murder. In the same year, people showed signs of relief with the release of Amanda
Knox, and obvious tension with the freedom of Casey Anthony.

What do college professors say? In a small survey, which includes the opinions of Cuyahoga Community College Professors, one-half showed opposition in regards to the death penalty, while another half gave support for it.

Regarding those who have committed gruesome crime, and with the conviction of irrefutable proof, Professor April Abbott stated the following; “Let them sit on death row and feel what it’s like the last moments of their life knowing that they are going to die just like their victims did. That punishment fits the crime.”

In a different view regarding the death penalty, Professor Fredrick Gram stated the following; “It’s too final. In many cases, innocent people have been put to death. Juries tend to believe eye-witness accounts far more than is justified.”

In a logical statement having to do with some (or many) in the judicial process, he concluded; “prosecuting attorneys do not seek truth… they want to win.” Many ask “does the destruction of life actually deter crime from occurring?” Sources compare possible homicide rates in the U.S. with that of European countries, and the results appear to conclude that it does indeed deter crime. On the other hand, this does not answer whether or not execution is morally just.

Regarding human involvement in the execution process, Tri-C Professor Zenobein Adams said: “Although, I believe that there are many crimes that warrant the death penalty, I feel that death is God’s option.”

CCC Professor Marla Colvin too concluded on behalf of the opposition. She stated, “Funny thing . . . the death penalty is imposed on others in the U.S. because those
[certain individuals] are convicted of killing. So the judgers in essence believe that their killing is good, and the other person’s killing is bad.” In this quote, she points out a serious concept. The question to think about is this: Why kill people (who kill people), to show killing is wrong? Is using the sword in the name of justice, ever right? Or does the judicial system actually have a very corrupt ideal of what justice really is? After all, true justice may entail one gaining a contrite heart. If one is killed off, then how is a contrite heart ever gained?

From the darkest stories of serial murderers, to the corruption that has been used to justify the killing of those who have been later found to be innocent, justice is believed
to be a key to maintaining order in the world. Yet, human beings must take into account that no matter how brutal a crime, execution is still murder — murder used in the name
of justice. So, can we justify the execution process, if execution itself is what so many of us don’t want happening in our own society? Among those who are unsure, to many the
answer might be as clear as day. “It doesn’t seem to make sense!”