In a rally held at Cuyahoga Community College’s Recreation Center, First Lady Michelle Obama spoke to an enthusiatic crowd who received her with energy and delight. 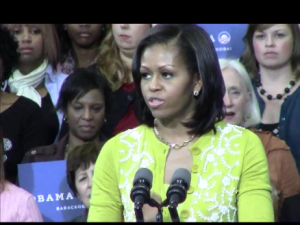 She kicked off her speech by announcing that they were one vote closer to electing her husband as next president after she voted for him by absentee ballot this morning at the White House.

She commented that the president wouldn’t have made it through school without the help of financial aid, and she promised that he would continue to fight for college students who rely on Pell Grants and on student loans.

The state of Ohio is a key state, she said, and that grassroots movements are necessary to persuade more people to the ballots this year.

Ms. Obama pointed out that early voting has begun in Ohio, and everyone should be voting now, which can be done at the Cuyahoga County Board of Elections, or by requesting an absentee ballot to be sent.

With 22 days until Election Day, the First Lady was spreading her husband’s message that “change” is necessary for the future, and that it requires patience and tenacity.

Prior to the event starting, Obama was delayed by nearly an hour after two law enforcement officers on motorcycles side-swiped each other while escorting the First Lady in a motorcade in Delaware, Ohio. The officers suffered nonlife-threatening injuries.