[su_row][su_column size=”1/3″]       The wonderful readers of THE VOICE asked for us to write about Breaking Bad.  Fabricated Facts snuck into Vince Gilligan’s house and found this in his garbage can:

Hello, my name is Tina Trinato, and I am writing concerning your show Breaking Bad. I love your show-don’t get me wrong; I really do! I get my entire family to watch it; it’s our Sunday tradition to have a nice family orientated dinner then watch your show. Everyone in my family likes it, from my ninety-year-old mother to my eight-year-old son Tommy. The reason [/su_column] [su_column size=”1/3″]I am contacting you is because my eight-year-old son Tommy has started breaking bad in school. At Tommy’s school, there is a no tolerance on a sugar ban. Tommy has been inspired by your show to start a sugar empire. He makes sky-blue colored rock candy in his toy recreational vehicle. Creating the candy isn’t the issue, the main problem is he sells it in school. With the giant sugar ban, it is very illegal. Tommy also breaks out into violence at school. Last week, he ran two students over on his bike, punched his friend in the face and yelled at his teacher, “I am the danger! I am the one who knocks!” Tommy used to be a good, straight-A student until YOUR [/su_column] [su_column size=”1/3″]show came along. I am just requesting if you could possibly turn the violence down a bit. While you’re at it, maybe if you could cut back on the amount of drug references as well. I don’t want my Tommy to be a Menace II Society so I am asking if you could change your show for the better. Maybe have Jessie start college and get a PhD in occupational therapy. That would be great!

Have an idea for Cody at Fabricated Facts (because isn’t it obvious he doesn’t have a clue)? Email us at cccvoiceoh@gmail.com. 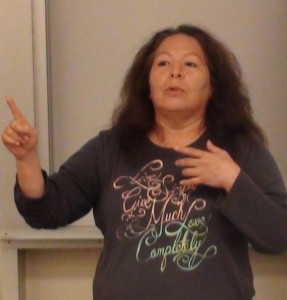 The Office of Diversity and Inclusion and the Offices of Student Life at Cuyahoga Community College Eastern Campus is hosting the Fall 2014 Diversity Series; The series roster is designed to bring forth attention to diverse topics and cultural issues through lectures, workshops and programs aimed to educate and enlighten our students, faculty and community.

One series in particular, with Isabel Valenzuela and (interpreter) Tony Nelson; “ We Question While We Walk: Building Community through Popular Education in Albany Park, Chicago, ” shared insight from their work in ‘popular education’ and it’s day to day trials and experiences.

Isabel Valenzuela is the coordinator of education and community organizing of Centro Autonomo. She graduated from the High School program of Centro Autonomo in the year 2013. [/su_column] [su_column size=”1/3″]

She has participated in the collective and cooperative groups of Centro Autonomo, groups such as Cleaning Power, Events Committee, and asambleas. She has an extensive communication with the community members of Centro Autonomo. Tony Nelson has worked as a community organizer, teacher, and human rights activist around the issues of immigration, education, prison education, anti-neoliberalism, and US-sponsored torture and currently serves as the director for the Mexico study abroad program. He received a BA from Grand Valley State University and a MA from Syracuse University in the areas of communication theory, rhetoric, and philosophy.

The Albany Park Autonomous Center or Centro-Auntonomo is located in Albany Park-Chicago, Illinois, where both Isabel Valenzuela and Tony Nelson serve as community leaders. This center is an expansion of the vision created by Dr. Tom Hansen, the International Education Director of the Mexico Solidarity Network, established in 1988 to 1997; Director of Pastors for Peace. From 1987 to 1988; organized the first national material aid caravan to Latin America as National Coordinator of the Veterans Peace Convoy to Nicaragua. From 1984-1986 he was co-founder of the New York-Nicaragua Construction Brigade. [/su_column] [su_column size=”1/3″]

The Mexico Solidarity Network organizes fundamental social change between the US and the Mexico border. Isabel Valenzuela has been with the center for five years; initially being one of the residents who needed their services. The doors of the Centro opened in 2006, where it creates space for many Latino’s to meet, share, organize and construct community driven social change. The Centro-Autonomo is a community center in every sense of the word, autonomous; meaning creating social change through self-government.

Some of the services offered at the Centro stem from; Housing, Education; Health: Childcare; Immigration Rights and more. Valenzuela explained that many residents come to the Centro for assistance on many levels; but there main focus is to provide opportunities and work space for each individual and family to build educational, political and socio-economical growth and increase. The Centro does not offer charity, we offer ways to unite the people; acquire the need, through their own work ethic. 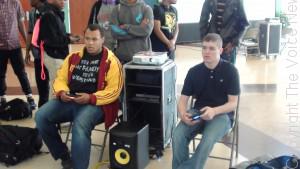 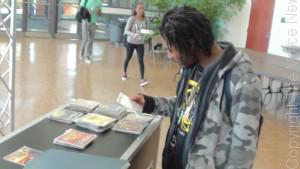 Khalil Champion selecting his song to make a music video to. 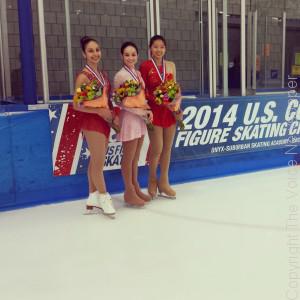 [su_row][su_column size=”1/3″]        While most students are struggling with balancing school and everyday life, Tri-c student and figure-skater, Katie McBeath is gliding gracefully on and off the ice.

McBeath, who fell in love with skating at the tender age of 6 when her father took her to an 8- week class, surprisingly began competing by the age of 9. “I loved moving up levels and learning new things,” McBeath said. “I wanted to get to the top level.” Thirteen years and countless medals later, McBeath recently won silver in the 89th Annual Middle Atlantic Figure Skating Championship in New York, where she faced off against two former Olympic skaters. [/su_column] [su_column size=”1/3″]

When Katie isn’t busy perfecting her triple jumps, the Tri-c sophomore is working hard towards a degree in child psychology. McBeath’s talents go beyond the ice. Apart from being a full-time honors student, she also finds time to volunteer at Rainbow Babies & Children’s Hospital.

Though many students attend Tri-C for various reasons, McBeath’s reasons are relatively clear.

“It’s close to home,” she said. “And I love the small class sizes.”

John Panza, a Tri-C English and Humanities professor, is no stranger to McBeath’s hard work and devotion. “Katie brings the same discipline that she shows on the ice into the classroom,” he said. “She is a consummate student-athlete: intelligent, worldly, mature, and focused.”

Aside from juggling classwork and a rigorous training schedule, McBeath is a seemingly down-to-earth individual who loves listening to country music and aspires to someday skate for Disney on Ice.[/su_column] [su_column size=”1/3″]

All students face challenges throughout the year that test their ability to overcome and persevere, and McBeath is no stranger to such challenges. Last season she suffered a pelvis injury that appeared to be career ending.

“I thought I would never skate again,” McBeath said.

However, with a phenomenal physical therapist and sheer dedication, McBeath is working her way up to every skaters dream…the Olympics. The life of a skater and a student are one in the same. Whether you’re skating towards a gold medal, a degree (or in McBeath’s case, both) you may slip, you may fall, but a true champion gets up and continues to glide toward success. [/su_column][/su_row]

Preview: Behind the Headlines

Around 2 years ago | Covid Journal