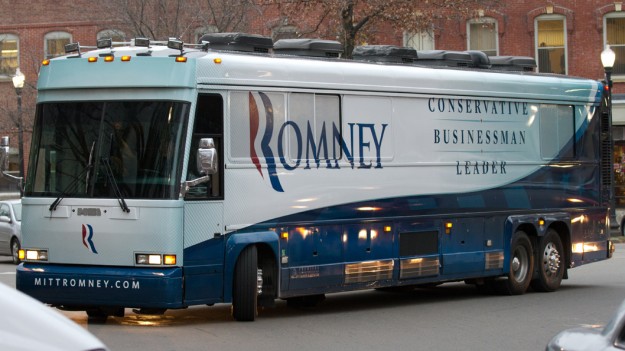 Protestors Make Presence On Campus, No Mud-Slinging On Obama

While most people who came down to Cuyahoga Community College June 14 showed up to support President Obama, there were other people there to support other political issues and candidates.

Representatives of the Cleveland Tea Party Chapter were just off the Tri-C Metro campus along with their president and with a smattering of Libertarian supporters. Then there was the seemingly sudden and unexpected appearance of the “Romney Bus” — even though Mitt Romney was in Cincinnati at that very moment rallying at a power plant.

“We are really just here to show our support for our fellow Republicans, not to talk anyone out of supporting President Obama.” said Izzy, who did not give her last name so as to keep the focus on the Party, rather than one person. She and two co-workers were there not only to put “a face to Freedom”, but also to oversee several volunteers who were making what they referred to as “I.D. calls”, apparently calling people to see where their political loyalties lie.

It may sound like a daunting task, but the people encountered were found to be rather serene. They were welcoming without being overwhelming in the least, including an invitation to watch the president’s speech from inside their air-conditioned tour bus.

Also very welcoming, though a bit more opinionated, were the members of the Tea Party. Cleveland Chapter President Ralph King seemed to have the same general attitude when it came to voters.

“We just want people to make an informed decision, whether they agree with us or not,” King said.

It was explained that they do not back any candidates at this time, only issues.This maintains credibility and dependability among their members, he pointed out. They stressed three key points: limited government, free markets and fiscal responsibility.

Tea Party supporters were polite and cordial and more than willing to share their information but never put any pressure on people to agree with them or join their cause. They were comfortable and firmly anchored in their beliefs, and were not out to gain votes — only to increase public awareness.

All-in-all, it was a calm and mud-free experience. That is, until a woman drove past four young Republican men being interviewed while holding signs, honking and screaming obscenities.

“Every party has their idiots, even ours,” said Jonathan, one of the GOP supporters whose interview was interrupted by the rabble-rouser.

Three days after Obama visited the Metro Campus, GOP supporters had their chance to celebrate with Romney at a rally held in Brunswick that brought an audience larger than Obama’s rally to the Medina County venue.