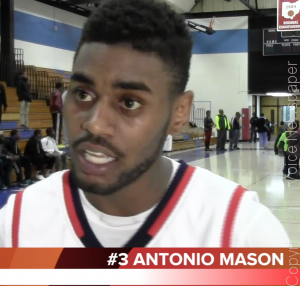 Life as he knew it changed, and he didn’t see it coming, or knew what hit him.A few days earlier, Antonio Mason, 22, was a second-year guard on the Tri-C men’s basketball team, conditioning and

practicing for their first day on the court with a conference opponent — a scrimmage at the Owens Community College Jamboree on Oct. 12th, in Toledo.

But, because of his involvement in a fight amongst some team members, Mason had to sit the scrimmage out.

While his fellow teammates were likely heading to catch a chartered bus to a Toledo game, Mason was driving in his gray 2000 Chevrolet Monte Carlo on Kinsman Road, just east of E. 55th Street — it was about 6 a.m., Oct. 12.

“This is all I remember,” Mason said, recalling the events in a hospital room wearing a neck brace. “There was an old lady holding my head on the ground. She told me ‘you were in a very bad car accident.’ I blanked out again.”

He does therapy several hours a day to work on hand-arm coordination, but at this point he can’t move nor has feeling in his legs.

Speaking in a soft spoken voice in a dimly lit room; several Mylar balloons that said “Get Well Soon” floated next to several cards pasted to a wall … Mason may have been in pain sitting alone but his face lit up as he had visitors.

Mason’s spirit was positive as The Voice crew awaited permission to conduct an interview; Mason was little upset that he couldn’t watch the Cavs home opener because the channel was unavailable on the hospital’s cable system. Photographer Aswan Harris was at the game and showed Mason several minutes of play on Harris’s phone.

Xavier D. Lindsey, 23, was driving a stolen 2014 Toyota Rav4 westbound on Kinsman Road, the same direction Mason was driving. The report indicates Lindsey was driving an estimated 100 mph when he slammed into the rear of Mason’s car, which was driving at 35 mph.

“The force of the impact caused (Mason’s car) to rotate out of control … striking the south curb … overturn onto its right side, and strike two wooden utility poles … the operator was ejected from the vehicle,” the report states.

In another life changing twist that happened Oct. 30th, Mason had the chance to watch the birth of his firstborn son via Facetime, an Apple app that broadcasts live images between two devices. Antonio Mason Jr. entered the world at 7 lbs., 6 oz.

“I’m just so upset that I didn’t get a chance to cut his umbilical cord,” Mason said.

Mason said his mom is really upset about the accident and will likely attend Lindsey’s court hearings, but Mason has a different attitude toward the man that did this to him.

“Personally, I don’t want to press charges. It won’t let me bring my legs back,” he said.

The Voice News Showcases its Top Stories This Term