New BlackBoard Ultra, What it may Offer!

Veterans Today Club Brings Awareness with P.T.S.D. Event It is a crippling mental illness, one that takes away the joys of everyday life. But awareness and education can lead to helping what is known as a daily struggle for those suffering with P.T.S.D. (Post-Traumatic Stress Disorder).

On Monday April 6th, The Veterans Today Club sought to bring awareness to this “silent killer.” The event began with Campus President Dr. Ron Liss delivering a powerful statement. “Thank you for you service,” he said. “I know I don’t say it nearly enough, I don’t think any of us do.”

He then turned the microphone over to Dr. James Banks, who runs the Crile Archives at the Western Campus. Dr. Banks enlightened the audience with a little Tri-C history as he spoke about Crile General Hospital and Tri-C’s storied past.

Tri-C is known to have a large amount of veterans on campus. This was important because Veterans Today really wanted to speak to those who could relate to the struggle. “They went through drama, watching their best friend die. I think they appreciate the awareness we tried to bring,” says Corey Nolan, who is the President of Veterans Today. Nolan along with his Vice President Billy Mortensen were also speakers at the event. Both have served tours overseas.
A guest speaker from the V.A., helped lend some knowledge into the specifics and different types of traumatic disorders with a statistic, which states that 80% of people who experience traumatic events slowly recover, the other 20% get stuck, which may lead to PTSD. The term “shell-shocked” was used throughout the event. The term, which is defined as shocked or confused because of a sudden alarming experience – is used quite often in the military and to describe anyone that has seen a traumatic event. Its origin dates back to World War I, as it was coined to describe the reaction of soldiers to the trauma of battle. 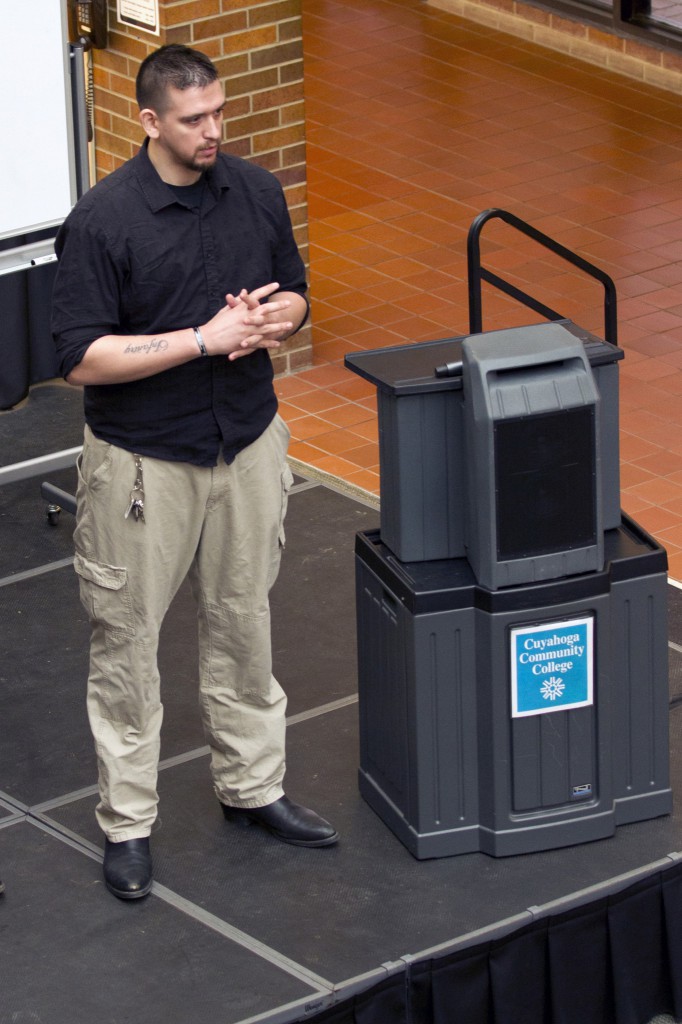 Nolan gave a personal account of his moments of being diagnosed by a mental health specialist while in the military, to his ongoing struggle of living the civilian life. He has often turned to tattoos and firing ranges to help him cope and relieve his stress and anxiety. For him it’s the little things that trigger his anger and being around certain things bring him back to those chilling military memories. Nolan and Mortensen put this event together to bring awareness to something that they have personal experience with. The pain and traumatic experiences that they have faced, they would wish upon no one. They continue to heal after their service in the military, perhaps with this event they may have helped others heal as well.

Permanent link to this article: http://www.cccvoice.com/2015/04/28/veterans-today-club-brings-awareness-with-p-t-s-d-event/