In their final series of the season, Tri-C proved they could hang with the best of the best, while earning some respect along the way.

After a 30 minute delay, due to a miscommunication on the start time with the umpires, the series finale was underway. The Challengers came out strong and jumped out to an early 1-0 going into the top of the fifth inning. Sinclair finally broke through and scored in the top of the fifth. Pitcher Connor Ryan gave the Challengers a brilliant effort as he gave up only three hits in 7 innings pitched, also tallying 6 strikeouts. The Challengers had a few costly errors, which gave Sinclair some momentum.

As the two top contenders in the OCCAC went at it, this one would need to be decided in extra innings. In the top of the ninth inning with a 1-1 tie, both teams came out swinging, literally, as they drove in two runs each. Tri-C was in a dogfight and they were loving every minute of it. Coach Agona had been preparing the boys all season for these types of moments and it seemed they were finally breaking through.

In the tenth inning the Challengers found out why Sinclair has been the best team all season; Tri-C gave up the winning run in the top of the tenth. They had no answer for Sinclair in the bottom of the inning and after such a hard fought game, they were defeated.

After the marathon in game 1, both teams had about 30 minutes to prepare for the second half of their doubleheader. Tri-C had to put the heartbreaking loss behind them and focus on taking Game 2.

As the game was underway, it seemed Tri-C was having a hard time forgetting about the loss. Pitcher Tom Keaney gave up two quick runs and put the Challengers in a quick 0-2 hole. The boys quickly answered back with a run of their own making it 2-1 Sinclair after the first inning. Keaney settled down after that, only allowing 3 hits all game. He wasn’t the only one getting into his groove as the Challenger’s bats came to life as they pounded Sinclair for 7 more runs in the next two innings. Heading into the fifth inning with an 8-2 lead, Tri-C was determined to finish the job.

The game was an offensive showcase for Tri-C. They defended their turf and could have very well won both games, if not for those costly errors. It was not just hitting, Brady Haba came up huge with two stolen bases. Even after his rough start, Keaney pitched another great performance, tallying 6 strikeouts. The Challengers had defeated Sinclair.

A new day and a new opportunity to showcase their talent against Sinclair.

With the weekend series tied at 1-1, it would be another offensive showcase for both teams. The Challengers came out on fire again, as they carried over the momentum from the previous day’s games. Compiling seven runs in the first 3 innings, the game seemed already decided. Brady Hoba’s 3 RBI’s and two triples, one each from John Izquierdo and Eric Roder capped off the offensive firepower.

The dominant pitching continued as Kyle Warner held Sinclair to only 5 hits. He would give up a home run in the fourth inning to Sinclair’s Tyler Cowles. Pitching has been a focal point this season for the Challengers.

Tri-C was too much for Sinclair as they defeated them for the second time in a row. Their confidence was at an all-time high.

Sinclair quickly struck with one run in the first inning. Tri-C answered back with two runs in the second. Daniel Sexton was on the mound for Sinclair, he went into the game with a perfect 8-0 record. His performance was key as he only allowed 4 hits. Brady Haba was able to briefly get the best of him with a homerun.

As the game entered the third inning, it was blown open by an onslaught of hits by Sinclair. Challenger’s pitcher Ryan Andrzejczyk gave up six runs, making it a 7-2 game. The Challengers answered back with one run in the bottom of the third. The Tartan Pride tacked on two more in the sixth and another two in the seventh inning, capping off the blowout.

The Challengers came into the series against Sinclair eager and ready to show their skills. They did just that as they split the series 2-2, including their classic opening game. They finished the regular season 36-18, a powerful statement in Coach Agona’s first season as the Challengers head coach. They will now host the Sub-division tournament as their post season begins. 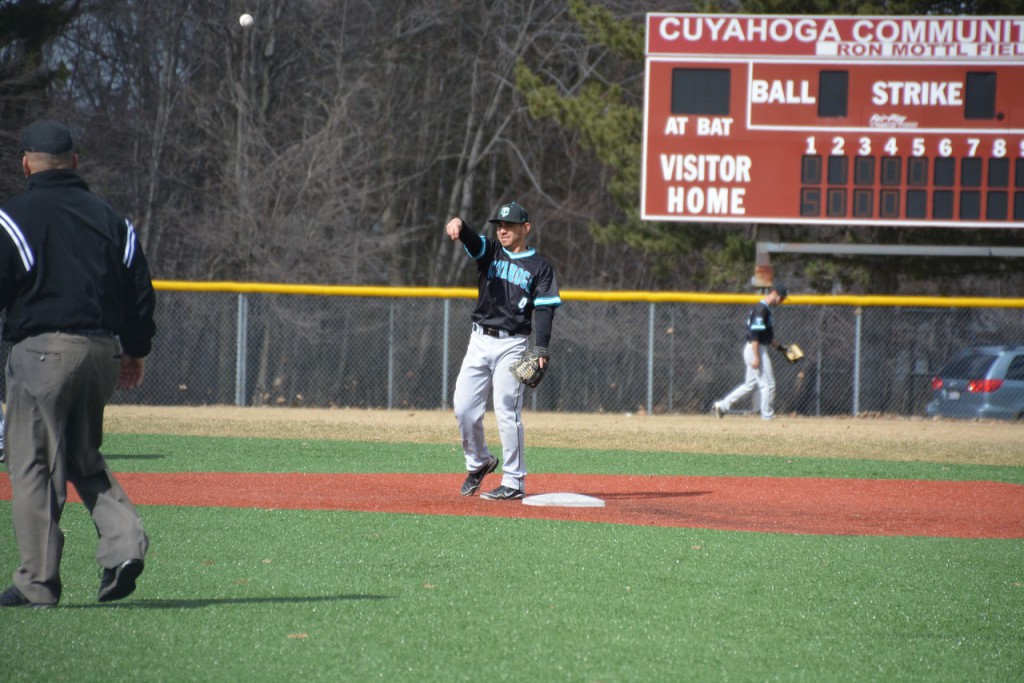